Terry Garthwaite is an internationally known singer, songwriter, composer, producer, and teacher. Her recording career dates back to the late 1960s when she and Toni Brown formed the rock group Joy of Cooking. She recorded several albums with the band, and then a dozen others by herself or in collaboration with other jazz and blues musicians.
Terry has also produced recordings by other artists including Jasmine, Rosalie Sorrels, Rhiannon, Nicholas, Glover &Wray, Hunter Davis, Robin Flower, and Ferron, whose Garthwaite-produced Shadows on a Dime was awarded four stars by Rolling Stone.

In performance she has shared the stage with such artists as BB King, Janis Joplin, Bonnie Raitt, The Band, Allen Ginsberg, Santana, Rosalie Sorrels and writer Bobbie Hawkins at venues that include Carnegie Hall, the Joseph Papp Theater, the Hollywood Bowl, and Canadian Folk Festivals.

Terry's recent recordings and writing reflect an awareness of the healing nature of music. In 1992 she recorded her critically acclaimed Affirhythms - rhythmic affirmation chantsongs, and followed it in 2000 with Sacred Circles, songs of hope and heart.

In 2006, Terry began collaborating again with Toni Brown to put together a Joy of Cooking compilation. They pored through old tapes of live performances and studio forays--from their earliest beginnings in 1968--to find the best material with the best performances. The result is the double CD "Back to Your Heart", one disc of studio takes of never-released songs, and the other a live Berkeley concert from the early '70s.

She's published a book, Joy of Sound - Explorations in Awareness Through Sound and Song, that includes vocal games/exercises and a CD of chants, as well as a couple of small books of Alliterhythms--pithy positive songs and sayings in alliteration. Most of her songs are available in her songbooks.
Terry's music is an array of songs and sounds that encourages empowerment and delight, and radiates the healing nature of music. She currently leads vocal retreats, drum circles, and classes in singing together, playing with sound, and digging the musical garden. 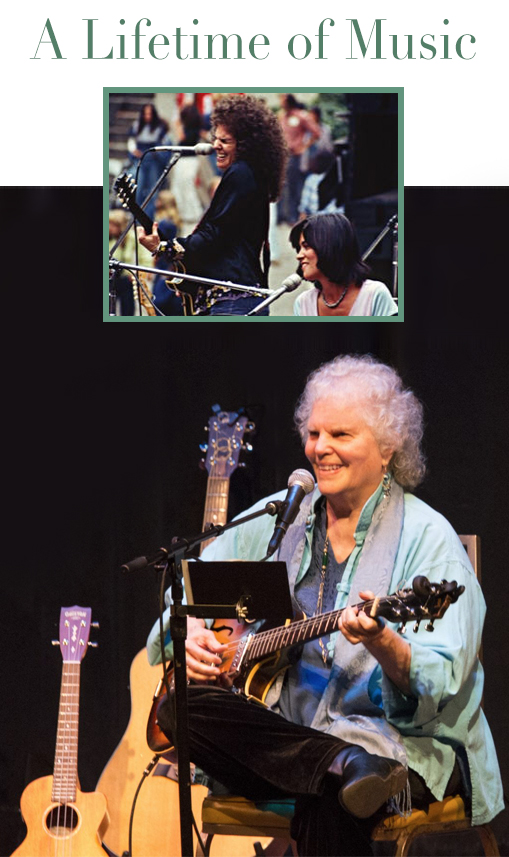